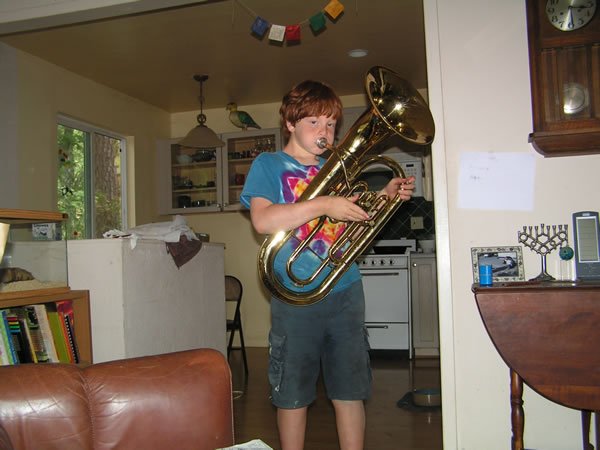 My son, Jacob, attends Sierra Waldorf School, in Jamestown, CA. Music has been a part of his curriculum since first grade. They started on wooden pentatonic flutes (watch Bobby McFarrin demonstrate the power of the pentatonic scale), then moved on to the C scale flute and recorder.

This year, in 5th grade, they started band. At their first class, band teacher Mic Harper (a volunteer – go Mic!) picked out which instruments would make up the 5th grade band and then sat down with the kids to decide who would play what. Jacob, of course, picked one that none of us had ever heard of. He called me that afternoon, very excited. “I’m going to play the baritone”, he told me. “That’s great”, I said. “Baritone what?”

Turns out that the baritone horn (known in the band world simply as the baritone) has been a staple in American brass bands for more than a century. Smaller than a tuba, it is easily confused with the euphonium (I’ll never make that mistake again). There is a 3/4 size version for first time students but Mic felt that Jacob could handle the full size instrument. She even found one that he could borrow for the rest of the school year!

It was only last week that the entire class had their instruments and lessons could begin in earnest. The baritone has a mellow sound, which Jacob has put to good use playing the three notes he has learned so far. As his regular teacher said, the classroom sounds like a flock of happy geese during band lesson.

Jacob has been around music all his life. I’ve always tried to impress on him that music is made by people, not by the stereo or the radio. I hope that though his musical education, he will feel a connection with other musicians as speakers of a common language.

To hear a solo performance, click the player below.