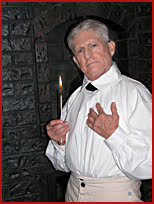 Last night, the Stage 3 Theatre was full for the premier of Rick Foster’s new play, The Air We Share. The play is a production of Duende Drama & Literature and tells the story of Joseph Priestley (1733-1804), an English scientist, philosopher and educator, who is one of three scientists to independently discover oxygen.  For this and other studies, he can be considered a founder of ecological science.

The Air We Share begins its run in Tuolumne County later this month, with the objective of performing for every 6th grade class in the county, at no cost to the schools. To support its work in bringing historically accurate plays to schools, Duende actively seeks funding from individuals, organizations and foundations. However, for the premier of this new play, the Board of Directors (of which I am a member) made the decision to perform for the community at no charge. The following are Rick Foster’s remarks, prior to the performance:

I have to say something about our decision not to sell tickets for this play, or even take reservations. It created a bit of confusion for some of you. And I want us to think about that confusion and what it says about this culture we live in.

Why would we pass up the opportunity to sell tickets? Are we crazy?

First ask: What makes a woman or a man commit to art? Curiosity, passion, obsession, the need to explore our deepest concerns and values with other men and women. In one word: love.

And what makes an audience invest heart and soul in a work of art? Also love. Love for what the art reveals, provokes, inspires in the way that nothing else can.

The fundamental transaction between the artist and the audience is a transaction of love. Without that, everything is phony.

So I was delighted to be part of our decision not to charge for tickets, not to take reservations, but simply to show forth what we have done, and to invite our community –— first come, first served.

For once, the transaction of love would be in the foreground. — No box office between the audience and the performance.

And it’s entirely fitting that I’m saying this before a play about Joseph Priestley. He felt about science in the way I feel about art. I only have him say the word “love” twice in my play — once about science and once about America — but you’ll see that love for life and humanity, planet earth and a higher power informs every thing he does.

Priestley invented things that could have made him a rich man. That did make other people rich.

But he passed up the economic opportunities without a moment’s regret. His love was to pursue his curiosity and to give his discoveries to the world. And it worked for him.

I now give you, Tom Maguire as Joseph Priestley in “The Air We Share.”

Contributions can be sent to: