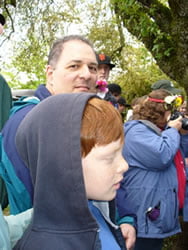 This blog is my own personal soapbox, where I can harangue passers by with whatever I please. These days,  my attention is on the web’s potential to enhance communication in the real world. As a web developer since 1995, I understand pretty well how the pieces fit together. Now I’m educating people about the possibilities.

A little history: I was raised in Los Angeles but traveled to the Pacific Northwest to pursue a degree in media and communications at The Evergreen State College, in Olympia, Washington. After graduation, I returned to work in Hollywood, as a recording engineer (which is not as glamorous as it sounds) at A&M Records and independently.

During the early 80s, I began working with first and second generation personal computers, forming a consulting service as my time in the music industry came to an end. In the mid-80s, I was Vice President of Operations and Lead Technical Writer for Barnett/Associates, a collateral production agency located in Aptos, California.

From 1988 through 1993, I took a leave of absence from the computer industry and became the first thing that I ever wanted to be when I grew up: a pilot.  I accumulated over 3,200 flight hours as a Certified Flight Instructor, charter and corporate pilot. I’m proud to hold the FAA rating of Airline Transport Pilot, having flown throughout the United States, Canada and Europe (which is as glamorous as it sounds), in everything from an open cockpit biplane to corporate jets and turboprops.

The only thing permanent is change and in 1994, I transitioned back into the computer business in the Central Sierra foothills of California. In 1995, I founded webdancers, a web development company, and in 2012 I became a partner in Sierra Online Services, which has kept me occupied ever since.

I am available through Sierra Online Services to work on projects, including traditional web sites, WordPress-based sites, Google Apps installations and social media initiatives. I am also available for speaking and teaching engagements. Please contact me here.