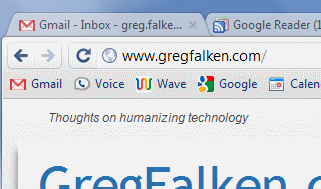 My web browser of choice these days is Google Chrome, from the “Developer channel”. There are two other channels for Chrome: Beta and Stable. The browser versions delivered through the latter channels are more “ready for prime time” and less prone to changing their behavior on a regular basis.  On April 8th, the Google Chrome Releases blog reported this innocuous change on the Dev channel:

Changes to the Omnibox (e.g. the bookmark star has moved, icon changes, etc.)

The Omnibox is Chrome’s name for the address bar, where the URL (address) of the current page is displayed and where you can type in a new one. The Omnibox however, has much greater ambitions than simply being a box where you can enter a URL. Here’s what the developers at The Chromium Projects have to say about it:

The purpose of Chromium’s omnibox is to merge both location and search fields while offering the user some highly relevant suggestions and / or early results.

The omnibox should focus on augmenting the user’s commands – all of the tools it provides should be oriented around making the user’s input ‘better’, and sending them to a destination.

The change made to the Omnibox was simple, yet controversial: Hide the “http://” (known technically as the protocol scheme) from the beginning of the URL. It has not been necessary to type this part of the URL for some time (though most people don’t know this), so, reasoned Chrome’s developers, why show it at all?

The reaction from the rest of the developer community was swift and nearly unanimous: this is a Really Bad Idea. The Chromium Issue Tracker contains such comments as:

– This is a bad change and should be reverted. This is Google using market share to force a change that doesn’t comply with relevant standards.

– We probably all agree that “http://” is an unfortunately nasty part of URLs, right up there with “www”, “.com” and all the other pesky line noise. Even Tim Berners-Lee apologized for the “//”. However, I don’t think the address bar is the right place to address this issue.

– The protocol specification is not optional. It’s a part of the URI. A URL bar that doesn’t show the actual URI is not very good at what it does.

-Also, www.google.com/ looks plain silly and unbalanced compared to http://www.google.com/. If you’re so into “prettifying” the URL for inane reasons (it’s redundant!), then get rid of that lingering / at the end.

-I’m going back to Firefox if this hits Chrome as a feature.

The response from the Chrome team was terse but clear. After four days, the issue was closed to further comments and its status was changed to “Won’t Fix”.

In choosing to pursue their vision for the Omnibox, the Chrome developers have taken on the burden of making the user experience better, even while making changes that break from the norm. Early in the issue discussion, Chrome developer pkasting wrote:

However, Chromium UI design is not a democracy and is not based on users’ votes, so “I don’t like this” carries very little weight. Concrete use cases that are actually broken are much more valuable — and have already caused us to file the bugs noted above. The fact that we haven’t elected to revert this change doesn’t mean your feedback has been “disregarded”, it means we’re not convinced a revert is justified– especially when it has been in the product for a couple of days.

The question I ask myself when it comes to issues like this is, will this change make my life easier and does it do so by removing choices that I would rather keep? I stopped typing “http://” a long time ago, because I knew I could. I understand why I might want to use it and the other protocol schemes that might be used in its place but the times when I actually do so are very few and far between.

I think that the impulse to simplify should be encouraged and that this is a small step in that direction. The implementation is very likely to change (and improve) before the general public on the Chrome Stable channel sees this feature but I applaud the Google Chrome team for sticking to their own mandate for this small piece of the user interface.