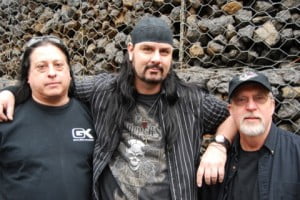 Tuolumne County (pop. 50,000) has it’s own born and bred rock star guitarist. His name is Greg Noll and his band, Crazy Ivan, is a regular at events around the county. During the 80s, he was the guitarist for the heavy metal band Poison, which had commercial success and a substantial following in Europe and Japan.

On March 22, 2011, at age 46, Greg suffered a stroke. He was lucky, in that the stroke happened while he was being examined by a local ER doctor for dizziness. He was airlifted to Doctors Hospital in Modesto, the nearest stroke unit. There, according to the Crazy Ivan blog:

Chris met the chopper at the hospital and helped get Greg admitted and stabilized. It’s now Wednesday afternoon and a few of the Ivan family went to visit him. He was in pretty bad shape BUT.. He had full mobility (including fingers and tongue) no slurred speech and was aware of his surroundings, himself and the people in the room. AMAZING!!!

To make this a little shorter, he was discharged on Saturday and is staying with good friends in Modesto who live close to the hospital. He is able to pursue his course of physical therapy and adjust to his new diet and medication regime. He continues to make slow but steady progress to what we hope will be a full recovery.

The hopes for recovery were realized at a benefit concert for Greg on May 13, 2011, at the Tuolumne Memorial Park, where he performed with the band, seemingly without missing a beat.

Crazy Ivan will be playing again in Tuolumne Park on July 20, 2011, at the Tuolumne Farmers Market. It’s always great fun to watch them perform for friends and family in their home town. We’re very lucky to still have Greg Noll with us to rock the house.