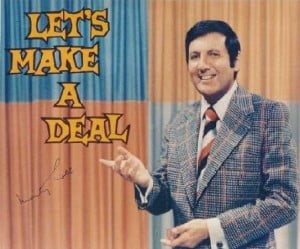 I just listened to Marc Maron’s interview with Monty Hall, of Let’s Make A Deal fame. Whatever you think of Marc Maron’s comedy (I’m a fan), he’s a great interviewer and his talks with elder comedy statesmen such as Carl Reiner, Mel Brooks and Dick Van Dyke are not to be missed.

Monty Hall told this story of his time in the early 50s as a struggling radio and television performer. He was living in Toronto with his wife and two children and making regular trips to New York City to try and find more and better work. Each time he went to New York he would try and meet with as many network TV and radio producers as possible but was having very little success.

As part of his campaign to find work, we wrote a weekly Memo From Monty, describing the past week’s trials and tribulations. This memo was mailed to all of the producers who continued to refuse to meet with him. This went on for several months and eventually he stopped sending them.

Shortly after that, he got a call from a producer at NBC, offering him a job as a game show host (not Let’s Make A Deal).

During the conversation, the producer asked, “What happened to Memo From Monty?”

Hall responded, “You read that?”

“Of course, I looked forward to it every week”, the producer said.

As I listened to this story, it occurred to me that Monty Hall was blogging, using carbon copies and the postal system. He was, in today’s terms:

He also had the ability to persevere. Landing this job took months and his biggest successes were still years in the future. And he never got a single response to his memos until someone called to say “yes”.

The rest of the interview was equally interesting. You can listen or download here for the next six months. Note: the portion of the podcast prior to the interview contains explicit language.