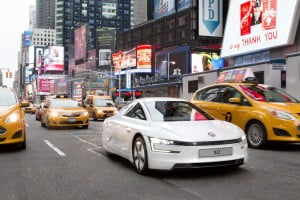 There is now a production automobile that gets 235 miles per gallon. The Volkswagon XL1 is a two-seat, diesel-electric hybrid that is now on sale in Europe. Of course, they’re only making 250 of them, with a sticker price of $150,000 but I think the concept has now been proven. And according to the Rocky Mountain Institute, who contributed this excellent article on Medium, 235 mpg is actually overkill, when it comes to fuel efficiency.

Equally surprisingly, the XL1 may actually take efficiency further than needed. RMI senior associate Jonathan Walker explains: “VW had a different goal than we do. Their goal was to make a 235-mpg car. In my opinion, you don’t need that,” he says. “RMI’s goal is get off carbon and oil. A 100 mpg car gets you there.” RMI’s Reinventing Fire analysis, he notes, can fuel its efficient vehicles, some at just half XL1’s efficiency, with any mixture of electricity, hydrogen, and advanced biofuels but no oil. “The added capital and cost of going for XL1 levels of efficiency is not worth it,” Walker says. “You start getting diminishing returns.” In other words, more modest but still radically improved fuel efficiency can yield an affordable Hypercar that doesn’t carry an XL1 price tag.

The possibilities for meaningful fuel efficiency are exciting but not yet available to regular folks. Eventually though, manufacturers will develop vehicles that save more than they cost. It can’t happen soon enough.