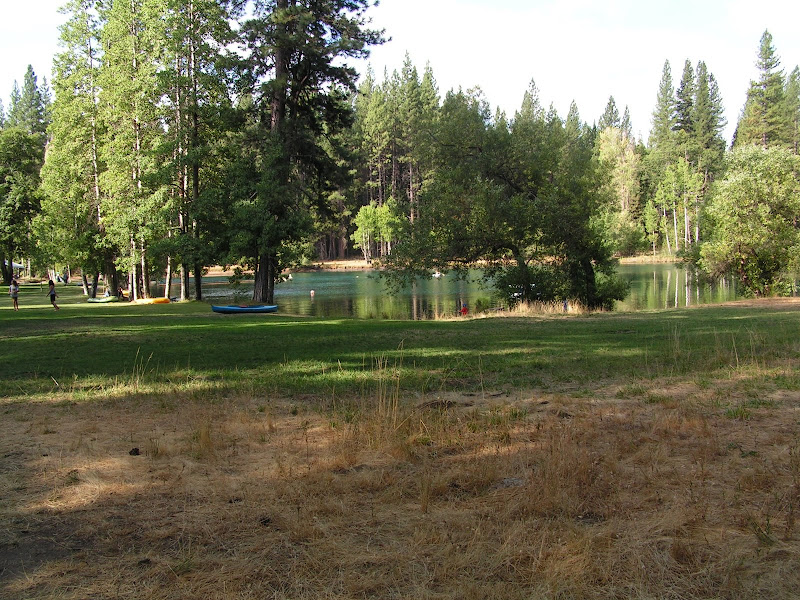 Sunday mornings at Strawberry Music Festival involves a lot of walking.  First thing after crawling out of my sleeping bag is to hoof it down to Music Meadow to do the “Strawberry Stroll”, during which you stand in line with a couple of hundred fellow Strawberians, waiting to lay out blankets, tarps and chairs for the day.  The gates open at 7 am and by 7:30 we’re all situated and headed back to our camps.

Since it’s Sunday, I’ll grab another blanket and head on down to Birch Lake, for the Revival that starts at 9 am.  Revival is a long-standing tradition at Strawberry and it’s often a challenge for the musicians who enjoyed the “Strawberry Way” late into the evening the night before.  Many bluegrass festivals have a gospel show on Sunday mornings but that doesn’t quite describe the Revival.

Rather than an invocation, we start with a story, often told by Strawberry’s resident storyteller, B.Z. Smith.  Whatever the subject, these stories always provoke a profound sense of gratitude and togetherness among the several hundred souls gathered there on the grass.  And then the music begins.

It’s a different feeling from the main stage at Music Meadow.  Bands that blazed though their sets the night before play with a bit more thoughtfulness (or so I imagine).  And, yes, there are more gospel numbers and they are welcomed.  The paid ticket holders have been here for three days now, the volunteers one or two days more.  Just about everyone is in need of a little revival to make it through the last day of the festival.

The closing act is the Del McCoury Band.  He and his band, including his sons on mandolin and banjo, are dressed in suits and ties, as they are for all their shows.  This year, Del is celebrating his 70th birthday and 50th anniversary playing bluegrass music.  At this announcement, he receives a prolonged standing ovation from a crowd that looks much different from those in his native North Carolina but  who are no less appreciative.

One of the songs performed by Del McCoury that morning is the gospel standard, Get Down On Your Knees and Pray, performed in this video at the Ryman Auditorium in Nashville, in 2002.  I’m here to tell you, Del hasn’t lost a step or a note in the past seven years.  Just imagine yourself listening to those harmonies under the birch trees on a cool September morning in the Sierras.