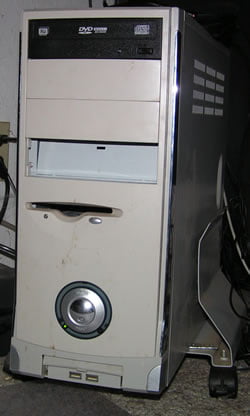 So, there I was working happily away when, for no particular reason, the power went out. Feeling very superior for having an uninterruptible power supply, I continued on for a few minutes until it was clear that this wasn’t a momentary blip. I then shut my computer down normally and went to read a book. A little while later the power came back on (good thing too – those chirping UPS’s were driving me crazy) and I began powering everything back up. When I switched the computer on, the first thing I noticed was that the CPU fan was running abnormally fast and loud. Second, none of the front panel lights came on and third, the monitors stayed stubbornly blank. When a computer won’t even start to boot, it’s usually a bad sign.

Long story short (and believe me, I’m leaving out a lot), the motherboard had failed and needed to be replaced. This was confirmed on a Friday and there are no computer shops in our little berg of Sonora that are open on the weekend. Luckily, my friend Steve Finigian, of Sierra Network Services was down in Southern California and agreed to drop by a Fry’s and pick up a new motherboard and CPU (just in case) for me. He delivered these on Sunday afternoon and two days later, I had a working computer again.

Along the way, there were some things that made the job easier and others that left me scratching my head and wondering, what were they thinking? Here are a few of the things that made it easy or hard for me to accomplish the fairly complex task of bringing my computer back to life.

Hard. While I was still diagnosing the problem, I thought I’d contact Acer tech support to ask what my symptoms might indicate. Because my system was about 6 weeks out of warranty (natch), all I received was a polite email informing me that their sagacious advice was available at a rate of $60 per half hour. They also provide no forum, wiki or other community platform for their customer’s to exchange information.

Easy. I posted the question that I would have put to Acer on Aardvark and within five minutes was chatting (on IM) with a fairly knowledgeable person who made some good suggestions. They turned out to be wrong (he thought it was a bad power supply) but he wasn’t alone in thinking along those lines.

Hard. The manual for the Termaltake power supply contains tables with headings written in white type on a light gray background. Yes, I’m old and don’t see as well as I used to but really…

Easy. Thanks to the ATX standard, designed by Intel in the mid-90s, All of the power connectors on motherboards are standardized, so you can’t plug anything in the wrong place or backwards.

Hard. Acer chose to use a power supply that is barely adequate (250w) in what is sold as a business-class computer. Even though it seemed to still work, I chose to replace it with the more robust (450w) Thermaltake.

Hard. The pin connectors inside the Acer case are unlabeled and didn’t appear to match the pin blocks on the motherboard. Rather than struggle with it, I pulled everything out of an old mid-tower case that I had and used that.

Hard. MSI motherboard manual pin block diagrams are illustrated from a strange perspective; sort of above and to the right. Hard to read (these old eyes again).

Hard. Mircosoft treats changing motherboards as if you’ve changed computers and so requires that you re-activate Windows.

Easy. The system for re-activating Windows over the phone is actually pretty slick. Voice recognition and clear input screens made the operation painless.

Easy. The answer to nearly every question I had during the entire process was available online. In almost every case, they came from people, not companies. They came in the form of forums, blog posts and instant messages, all tied together by search engines. It’s a pretty amazing time that we live in.

Technology is a complex thing. Replacing a motherboard or building a dynamic web site or producing a videocast requires a lot of thought and prior knowledge. Most people recognize this (to those who say, “it’s not rocket science”, I reply, “you’re right, it’s computer science”). We need to remove the little stumbling blocks, like too-small type, at every possible step. This should be the task of everyone connected to technical endeavors. For those of us who already have a certain level of knowledge, this is hard to remember but I promise to try.