Today I paid Anthem Blue Cross the first health insurance premium that I’ve paid since 2008, when our family dropped out of the privately insured market. At that time I was paying more than I could really afford for myself and my son. My wife, who has a preexisting condition, had been off the policy for about a year. When I tried to switch to a different policy with a higher deductible, I was surprised to be denied coverage due to a preexisting condition of my own, which I have since learned was misdiagnosed.

So we joined the ranks of the uninsured. Luckily, we were all relatively healthy (preexisting conditions notwithstanding) and were not in the habit of regular doctor visits. Over the years we had few reasons to seek medical treatment: ob/gyn visits for Amy, a drained cyst for me and lots of dental bills, which wouldn’t have been covered anyway. But hanging over us was the worry: what if something big, or even something medium sized, were to happen? There are too many stories of medical bills wiping out all the money a person has in the world. There but for the grace of God went us.

And it wasn’t like I was ready to rush into battle to fight to get our old insurance back. Not only was it more than we could afford, but for the money we paid out we got exactly nothing back in return. We never reached our deductibles and we paid out of pocket for treatments that we actually received, like dental care and acupuncture. 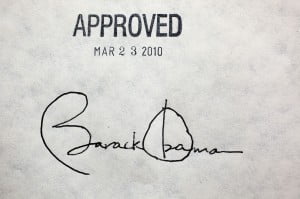 When the Affordable Care Act was passed in 2010, I was cautiously optimistic that it would apply to us. I remember talking with our acupuncturist when we were discussing whether I should try western medicine for a particularly stubborn problem. “You only have to wait four years”, he said. Little did I know the long and contentious route that the law would take to being enacted.

Now here we are, paid up (at a subsidised price that we can afford) and ready to have health insurance in 14 days. I know there are those who say that others are sacrificing so that we can take advantage of this program. To them I say thank you and if our roles were reversed, I would do the same for you.